A downloadable game for Windows, macOS, and Linux

The Game is still in early development. Many of the planed features are yet to be implemented. Expect Bugs.

Deep in the Void plays in a Sci-fi Universe where you, the Player, were part of a Space Expedition with others from your home World. On your way from Platina X-27 to Frek Z-Y your expedition fleet was mysteriously pulled out of your Warp drive, destroying most of the fleet and heavily damaging your ship.

Fortunately for you, during the incident you were doing  an Inspection on a mining Vessel. After a couple of hours, you wake up and start to realize your situation. The mining ship's Artificial Intelligence “Cora” has started an emergency procedure and activated an emergency Station.

The Ai gives you control over the mining vessel and gives you first Instructions. She tries to scan the surroundings and tells you to start mining the asteroids close to the Station.

The ship of the Player is broken, because of this his ability to move is restricted. The ship also shows vital damage to its hull. The Player is greeted by the Artificial Intelligence.  She tells you about the Incident and gives you your first tasks. 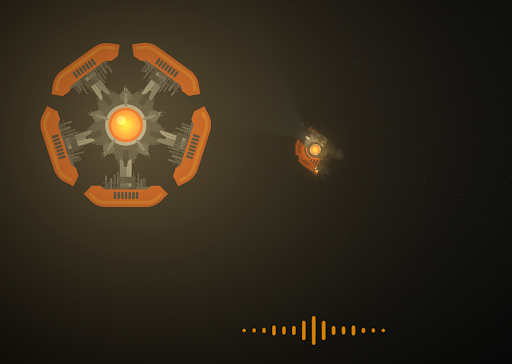 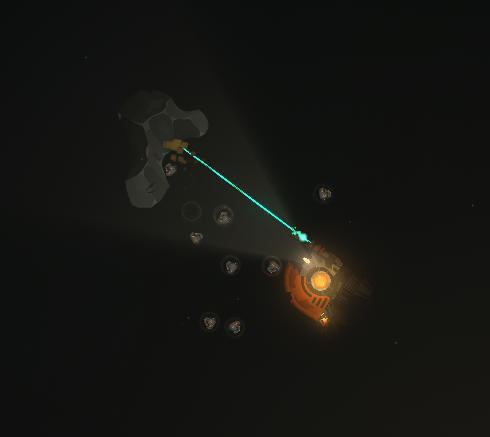 The Emergency Station provides a cargo to store all Resources. It is also the Science lab, with which the Player can repair his ship, and start to gather knowledge about different Buildings. 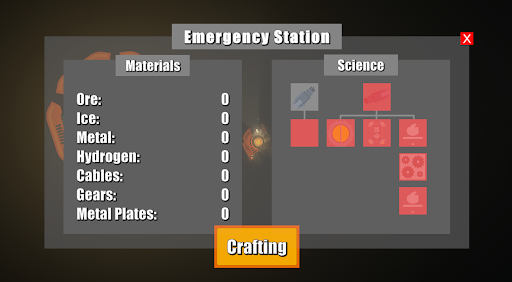 When the Player traverses through the Science tree and researches the “captain's interface”, he will be able to access the “Build UI”

Factories & Furnaces are the Core elements in “Deep in the Void”.

With these Buildings, it is possible to automate the construction processes and later get more Technologies and Defensive Weaponry. 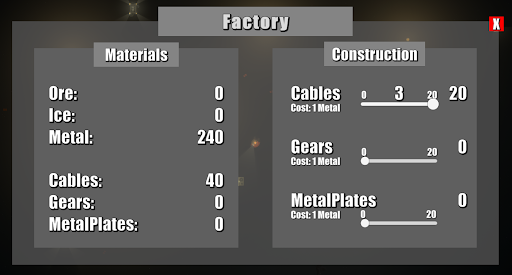 The Goal of the Game is to expand your Colony and ready your defenses against hordes of Aliens. 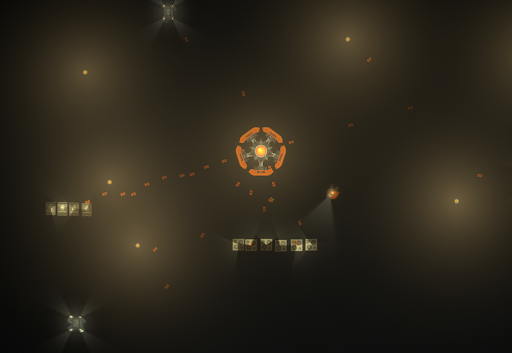 Another Core Mechanic is the Radio wave Pollution. Aliens are attracted to the radio wave pollution. Their goal is to destroy you and your Colony, because they hate everything that emits those waves. Radio wave pollution is being emitted when constructing and maintaining buildings

Once the Radio wave Pollution gets high enough, nearby aliens will form an organized attack against you. The Player needs to make sure that Turrets have been researched and are ready to fend off the Threat. The Mining laser of the Player's Vessel is enough against the earliest waves, but too weak once the attacks get larger. 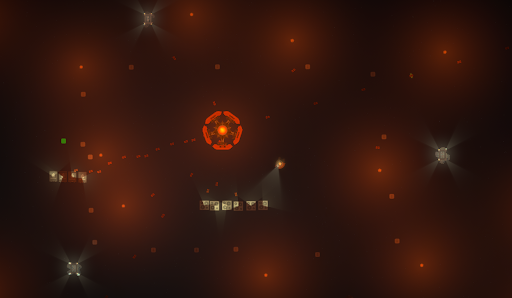 The Game is still in early development and many of the planed features are yet to be implemented.

- More complex and challenging logistics, beyond cargo drones simply delivering everything where it needs to be automatically.

- Different enemy types and enemy bases which need to be destroyed to make room for expansion. Alien technology can be salvaged from enemy bases.

- Many more buildings and technologies.

- Population and Crew mechanics. Most buildings will require a crew and they need water to be sustained. You can find survivor pods in space to increase your population.

- The ability to manufacture and command AI controlled space ships.

The game seems nice. I couldn't play it much yet, but i do plan to.

Have you planned a save and load option or is it supposed to be played in one sitting? Oh, and do you have plans to add subtitles?

Also, I noticed the spelling of resource is incorrect, it is ressource in the game.

And uh, isn't the amount of initial resources way too high, everything is beyond 9000 and cables and gears are 170 and 190 respectively.

i am using linux build btw.

Oh, and a way to locate the emergency station would be nice, if i decide to go really far away for some reason.

Hey, thank you for trying out the game! Good to know that the dev version with huge initial resources has snuck into the linux build ;)

Saving and loading is very high on our priority list and will be implemented before new gameplay features.

Subtitles will surely be in the game at some point, but they are not very high on the priority list. The player should be able to understand what to do from just the mission text in the top right ideally.

We are working on fixing the worst offending bugs and balancing issues at the moment and will release an update soon which will hopefully make the current experience smoother.

For some reason, I didn't get a "repair" button when I upgraded. Not sure what went wrong, I did everything by what the game told me to do. Also, when stuff gets destroyed by the aliens, the aliens just kinda sit there and don't do anything. They seem to be impossible to kill as well.

Other than that, the game was pretty fun! I'll check back on it occasionally.

Thank you for your interest in the game. The missing repair button is known and will be fixed in the next update. The Alien AI is still temporary, so we accept it the way it is for now.

Wow looks great, thank you so much <3

We are very happy that you liked our Game!

We wish you a lot more fun in the Future.

Have a great Week!

I really dig this and can see some great potential! I'm looking forward to seeing future versions.

There are a bunch small things that need to be worked on, bugs and QoL stuff, but I'm sure you've already got a lot of work ahead of you already.

Thank you! We are getting a lot of positive feedback at the moment. It really feels great and absolutely boosts our motivation!

An unlockable zoom might even be a nice touch to add to the immersion, similar to Upgrade Complete where everything is upgradable.

Anyway, the game looks very promising, I found it fun even with (or due to?) the added handicap. I didn't get beyond the repairs because I couldn't find the Repair button and I was already at 20 HP.

* Edit: It turned out to be that you cannot zoom in or out without a mouse. I gave it another try and it is pretty fun even incomplete and with a few bugs (which is understandable in this early stage).

This is exactly what we released the game early for. We didn't even think about people playing without a scroll wheel. Because of your and other peoples feedback, we decided to increase the priority of accessibility features for the next update.

Thank you and I look forward to reading what you think of future updates.

Great idea, factorio in space. Love it. Look forward to seeing a full release on steam down the road.

**Keep beacons white at all times, add a light on each point that changes from green to red in the direction of enemies. This would give a clear indication of which direction you are being attacked from.

**There seems to be a bug where if a beacon is destroyed all enemies freeze and become invincible.

The item/cargo system overhaul is the main thing we are working on at the moment for the next version. There will be an inventory system similar to what gamers are used to.

Strafing is probably a good idea, we will try it out. If its cool, it will be in the next release.

Thanks for the feedback!

I'm editing that post as I found new things. Lol didn't realise you had already replied.

Anyway, great game - love it. I feel I've pretty much hit the end of playability as it is but 100% looking forward to future releases.

Nice game, there is a few ehh things but that's what feedback is for.

To begin with I really aprreciated the fact that the surround sound is relative to the ship orientation (yes I love the littlest things) and the game is very promising but here are the problems :

-The movement is very slow (the broken reactor is cool though) it would be nice if you made the turning speed faster, and maybe (just a stupid idea of mine) imitate space at the beginning by removing friction (and making it faster as a tradeoff) and add a research to get stabilisators (to make it easier to control once you repaired your ship)

Thank you for the feedback!

Is the keyboard issue because WASD is different on your native layout? Accessibility is not a priority for us quite yet, but will definitely be there for the Steam early access release later this year.

We experimented with different movement speeds and decided the one in this release felt nice and chunky. You will be able to upgrade all aspects of the ships movement in the future, but there will be more automation the further you go up the tech tree. The ship and its location will become less central to the gameplay once you unlock more advanced technologies.

Save/Load is a must of course and will come.

Chucked $5 towards this even though it's not quite my jam (but close!). Just wanted to show some support for a cool concept and bolster the supply of survival/building/exploration/factory style games. :)

Man, this means the world to us! Your donation is the first money we have ever earned with our game. You are going on a list, and we will make sure to provide you with keys for our future release on steam! Thank you so much!

yeah SPAZ is a game we took some inspiration from, aswell as aspects of the Factory genre and the RTS genre will come aswell into play.

Greetings from Reddit! I tried the game so far and very much like what's there. It's a good basis for a space base building game with fun logistics and some enemy stuff.

I am certainly aware that this game is in very early development, so I won't bug you with every detail (pun intended). For the important parts tho: Very much enjoyed the disabled engine on the ship in the beginning, but so far I feel like the movement mechanic does not upgrade enough with the ever expanding size of the operation, and could probably use some tweaking to be a bit more fun in general. Maybe the turning could be made a bit more snappier?

Besides that, the AI-Voice, music and sound effects were really great, and helped to immerse me in the usually chill game play in a space sci-fi world! Honestly very impressive, since sound design is often overlooked.

General design language is also very appealing to me, as well as all the little effects and animations.

I will certainly come back later and eagerly await updates!

wow! Thank you so much for the Feedback. This actually gave me so much joy! After waking up 5 Minutes ago I can start this day with a boost in motivation! Thank you for that.

The movement will definitely be better in the future with more ship upgrades.

Aswell as new upgrades like a turret on the spaceship which can we controlled by the player.

Automatic item collecter with tractor beams and many more.

Making the movement snappier ist actually a really great idea to improve the gameplay for the player and I think it will not kill the immersion because the player upgraded this feature himself und thats why its understandable.

I wish you a great week and hope you will enjoy the future updates! 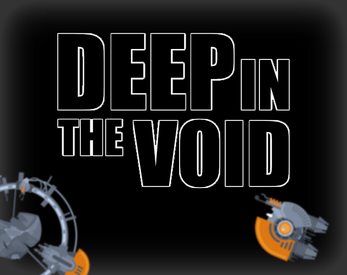